London nights out don’t just have to involve drinking & dancing. If occasionally you’d like to exercise brain instead of legs, there are some free, stimulating events you can go to for an intellectual night out – usually talks or lectures, sometimes in forum or panel form, often with questions from the audience and a discussion. I hesitate to use the word “educational” in case it makes it all sound too dry and academic – most of these talks are in fact very accessible, aimed at ordinary members of the public rather than experts, and did I say that the events I mention are free to attend?

If they have an enquiring mind and like learning new things, you could even take someone of your preferred gender to a talk as a date – it may make a refreshing change from the usual chatup lines (even intellectual scientific chat-up lines)! Furthermore there’s lots of research showing that keeping your mind active also keeps it young for longer – to quote my fave mag New Scientist: “It's well known that older people who stay mentally active are more resistant to cognitive decline and dementia, and many scientific studies have backed up this "use it or lose it" hypothesis (New Scientist, 17 December 2005, p 32). So if it works for older people, shouldn't it work for everybody?” (see also this).

If you’re interested, check out the event calendars of organisations such as the following. Some seminars are held during the day e.g. lunchtimes, but many are scheduled for the evenings. What’s more, podcasts or webcasts of some past presentations may be available free online too.

Where to find interesting talks in London

Here’s my own list of organisations that provide interesting free events in London open to the public, mostly reflecting my own interests e.g. in science, technology and music (if you know of any other groups or bodies which put on interesting free talks, please let me know and I’ll add them to the list.):

I’d also mention (declaring my bias as I’m a big fan of the dinners and was an Oxbridge grad, you can guess which in a para or two!):

A word of warning: avoid the Science Museum’s Dana Center like the plague. They used to be excellent a few years ago (e.g. a talk by Baroness Susan Greenfield), but recently their events have degenerated into dumbed down sessions where so-called “interactivity” is considered an adequate substitute for real lectures. Trust me: it’s not.

And for something else entirely

Finally, if you want a complete change in terms of your recreational / leisure activities (nothing to do with education, although music lessons / practice have also been shown to exercise the brain!), to exercise your voice and pump some oxygen into those lungs there’s always free online karaoke with friends at home! 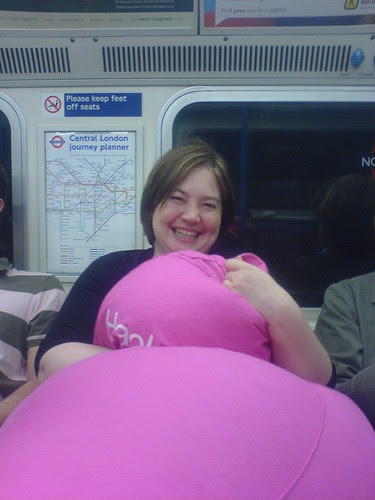 Sheila Thomson
Credit: photo by m0dlx (and it’s only a coincidence that the bean bag is girly pink!)

Today it’s Ada Lovelace Day - the brainchild of Suw Charman-Anderson, who started this pledge at PledgeBank:

“I will publish a blog post on Tuesday 24th March about a woman in technology whom I admire but only if 1,000 other people will do the same.”

Needless to say I signed up, as did many others, and the 1000 figure was reached pretty quickly. So here is my blog post.

The importance of female role models

First, why is it important to girls and women to have female role models – whether in computer science or sport or anything else? Surely in this 21st century everyone is treated equally regardless of gender, right?

Well, unfortunately - no. See Suw’s blog post and the links referred to in it, for starters.

There’s been a lot of research showing that role models matter to women, and having same-sex role models helps women more than it helps men, because of the impact on self-esteem: “results indicated that female participants were more inspired by outstanding female than male role models; in contrast, gender did not determine the impact of role models on male participants” - and indeed in one study even “female role models, although primarily chosen by females, were chosen by males to symbolise traits stereotypically associated with females: “…yes [I do have certain female role models]…[ I admire certain qualities of them]..they’re very good listeners..show good ability to relate to people and make them feel comfortable in terms of creating a good friendly family type environment…they’re very warm…”

For years it’s been well known that there will be a shortage of workers in the IT industry, and that women need to be encouraged to consider careers in information technology but that they don’t enter the field partly because of the lack of female role models.

So it’s disheartening that the most we seem to get are token efforts and some lip service rather than real change.

And for those who don’t know about Ada Lovelace, poet Lord Byron’s daughter, she was effectively the first computer programmer. Yes, the first programmer was female.

I’m not blogging about the handful of well-known women in computing / technology whose names people can recite off the tops of their heads (some people anyway; not enough). I’ve already mentioned some famous women in computing science before and no doubt I will again, as will many others.

This time, I’m blogging about Sheila Thomson, pictured above, because I think it’s important to draw attention to the achievements of ordinary women too: those women in technology whose accomplishments might otherwise be little sung (at least at present – who’s to say how famous she may become in future!).

I am blogging about Sheila as a role model because she is one.

She’s an example par excellence of someone who’s successfully moved into a technology career entirely through her own efforts and skills.

While Sheila was working as a school librarian, she taught herself computing and became an expert in XSLT.
When an opening for an XSLT specialist came up at the BBC, she applied. They didn’t insist on a formal qualification in computer science - they wanted someone who really knew the subject properly, and she proved that she did by passing their subject matter test with flying colours.
She is now a software engineer with the BBC working at the BBC World Service. What’s more, she also gives up a lot of her own time to volunteer with the Open Rights Group.

UPDATE: Here's a great video of Sheila on electronic voting - doing a spoof evil-dictator presentation, pointing out the strengths of traditional voting methods and how e-voting in fact makes it much easier for the ill-intentioned to control the outcome of an election. Talk proper starts at 1 min 48 secs, for the impatient!

And here is a video of Sheila talking about XSL at at BarCampLondon, filmed by Ian Forrester:

If Sheila is not a role model for women in technology, then I don’t know who is!

And I’d also like to mention Sarah Blow who founded the Girl Geek Dinners, a concept which has now spread worldwide; and inspirational teachers like researcher Dr Alessandra Russo.

There are plenty of female role models in technology – just not enough, and not enough known about. May all that change – and soon.

I know Sheila personally (and I’m also an ORG member), so some might say I’m a bit biased. But I’m not – her achievements are real, and she deserves full credit for them. I have been involved with the Girl Geek Dinners too.

How to save money on online orders: diginomics

Less cryptically, there’s a simple tip embodied in that statement which may help you save money when you order over the internet. And certainly in these *credit crunch times of economic recession, so many things are so expensive that every penny or cent (or euro!) can make a difference.

It’s a truism that sellers want to charge you the maximum they can - so they’ll try to make you pay the most that you’re willing to pay. It’s simple market economics, supply and demand.

And, with the power of the Web / internet, they can figure that out, because online they can compute things very quickly, live, in real time.

This differential pricing is just an application of diginomics, indeed a very sensible application as far as the vendor is concerned, because it helps them make the most money that they can - and, after all, it’s their profits, their bottom line, that they really care the most about.

So, what can we poor consumers do? Why, figure them out, and use their tactics to our own advantage, of course!

Below is a suggested counter-strategy for consumers when shopping over the Net.

Now note that this doesn’t work with all (or indeed many) websites, but only with the ones who apply differential pricing to different customers or at different stages of the shopping / ordering process, it really can make a difference. An example of a site which does this is business cards site VistaPrint.

With those points in mind, here are the suggested steps:

If you found that this tip worked for you, please leave a comment saying so, and list the names / Web addresses of theonline shopping sites it worked for!

Tags: money-saving, money saving, save money, how to save mone, discounts, diginomics, economics, tip, Improbulus, A Consuming Experience
Posted by Improbulus at 8:30 am 2 comments

For anyone who missed it, the BBC had an item about unfortunate names, discovered by parenting site TheBabyWebsite.com from going through online phone records.

See the Baby Website’s full list, and the BBC item for more names sent in by readers.

My own favourites, apart from the ones above, are:

If you like this sort of thing, do see: