Microsoft changed the way that Internet Explorer cookie files work and randomised cookie filenames, for security reasons; the cookie text files now have random names which don't indicate the name of the website that saved the cookie, and you have to open up each cookie file individually to check what that is.

However, you can still view the contents of all your IE cookies, unmangled, by exporting your cookies to a single cookies.txt file. Then if you open up that cookies.txt file, you can see the cookie info, in a much more comprehensible, intelligible user-friendly format, eg: 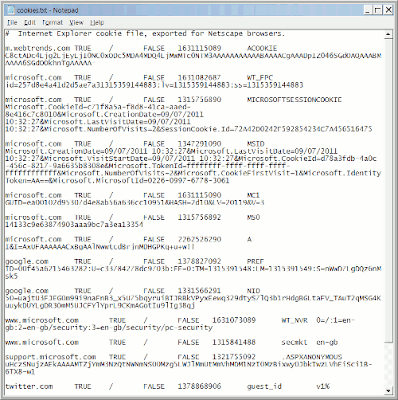 I compared the contents of a couple of the new cookies against the cookies.txt versions to try to figure out how they work. I found that if you copy and paste the text from the cookie file into something else (eg a new text document), the info is broken up into separate lines (ie there's hidden new lines to separate the different components of the info).

The cookies.txt equivalent of that was:

So that helps to figure out the new format of the cookie file. The elements seem to be in this order:

I worked out the purpose of the * from looking at a single Google cookie file, for example these contents, of a single txt file:

- showed up in the cookies.txt file as this:

I've not yet worked out how the name of the cookie text file relates to anything in its contents (which no doubt is part of the purpose of the security fix!), so you still can't tell which file was set by which site without opening up each file. The order of info in the cookies.txt document doesn't match the order of the dates that the cookies were created or modified, and they're not in alphabetical order of domain name either. But at least it's possible to check out all the contents of all cookie files at once.

Worried that your cookie filenames have changed to incomprehensible random strings of letters and numbers? No need. Microsoft has, for security reasons, changed the way IE cookies are named. This is to improve security and reduce "cookiejacking", addressing one way in which attackers might be able to access your cookies (which could include your login information etc).

Side effects: some apps depending on the old cookies names system broke, eg CCleaner and WinPatrol. Also, it's now harder for users to figure out which cookies were set by which websites, as you can't tell the website name from the cookie name anymore. You have to open up the cookie file to check.

However, other browsers like Firefox aren't affected by the change - it's Internet Explorer only.

Internet Explorer cookies used to have filenames with the structure: yourcomputerloginname@partialdomainname.txt eg johnsmith@microsoft.txt (or johnsmith@msdn.microsoft[2].txt etc).

IE cookies are typically located in your AppData\Roaming\Microsoft\Windows\Cookies folder (to find the AppData folder, click Start, in the search box type "appdata" without the quotes and hit Enter. If that doesn't work try "%AppData%" again without the quotes which may go straight to the "Roaming" subfolder).

The security hole, and update

However, in August Microsoft released a Cumulative Security Update for Internet Explorer (2559049) which (according to Microsoft Security Bulletin MS11-057) addresses a "Drag and Drop Information Disclosure Vulnerability CVE-2011-2383" which existed because IE (all versions) didn't properly restrict access to store cookie files.

In more detail for the techies, before the update Internet Explorer did not "properly restrict cross-zone drag-and-drop actions, which allows user-assisted remote attackers to read cookie files via vectors involving an IFRAME element with a SRC attribute containing an http: URL that redirects to a file: URL, as demonstrated by a Facebook game, related to a "cookiejacking" issue".

This vulnerability meant that "An attacker who exploited the vulnerability when a user views a Web page and performs a drag-and-drop operation could gain access to cookie files stored in the local machine."

What the security fix changes

Reportedly this change has been seen in several Windows operating systems, ie XP, Vista and Windows 7, and several versions of Internet Explorer including IE8 and IE9 (which would make sense as Microsoft's info says the vulnerability affects Internet Explorer 9 and previous versions).

A Microsoft blog explained the change - see the "Cookie Filenames are Randomized" heading. It's now harder for attackers to guess the location of a particular cookie as IE cookie files are now named "using a randomly-generated alphanumeric string. Cookies are not instantly renamed on [the security] upgrade, but are instead renamed as soon as any update to the cookie’s data occurs."

As mentioned earlier, certain software depending on the old system doesn't work anymore, and will have to be tweaked.

From the viewpoint of those protective of their privacy, while you can't see the website's name from looking at the cookie filename, you can still see it if you open up the cookie in Notepad or other text editor.

For example, here's the contents of cookies saved by Microsoft when I visited and then re-visited their webpage about the cookie change. You can see "microsoft" in there: 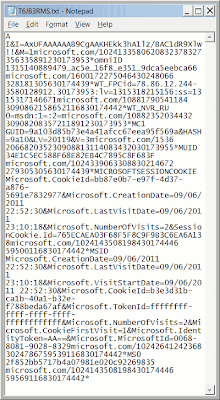 And here's the contents of a cookie saved by Google when I searched for info on the cookie change using the search box in Internet Explorer. Again, you can see "google.com" in there, although the filename is now "25Z1H29G.txt", and no longer mylogin@google.txt: 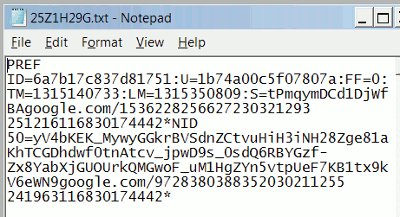 For more details of how it seems to work behind the scenes, I've done a separate blog post on how to view the contents of your Internet Explorer cookies in a more user-friendly way.

Here's how to crop a bunch of JPEGs with the free JPEGCrops (Windows), which I used where I needed to chop half an inch (of printer-ink-wasting-black) off the top edge of one set of scanned music score pages, and half an inch off the bottom edge of another set (where I'd turned the book upside down to scan those pages). I couldn't find a proper howto, so here's my step by step.

Cropping multiple files in a batch saves having to open, crop and save each JPEG individually. You just set the edges of the first image (where you want it to be cropped to), and the rest of the photos or pics can automatically be set to the same dimensions.

If all the unwanted bits are on the same part of every image, eg always the left margin or always the bottom margin, you can use the excellent free PDFill PDFTools. My problem was that for some images I needed to crop one edge, and for others another edge, so I couldn't do that - hence JPEGCrops.

I couldn't get JPEGCrops to work fully at first, so here's my step by step tutorial, including all the basic stuff most people skate over:

Posted by Improbulus at 7:47 pm 0 comments