If you used desktop blogging client software on your computer, like Windows Live Writer, to blog on Google's Blogger or Blogspot.com, you'll know that since April/May 2015, it stopped working. This is because, in late April 2015 Google updated the authentication method for logging in to Google services. Many people had problems blogging on Blogger / Blogspot after that.

One big tip. When you use Open Live Writer for the first time, or add a new account to it, there's a further option in OLW which wasn't available before December 2015. It's easy to miss it (I did!), so I'm flagging it here.

In "What blog service do you use?", make sure that you select "Google Blogger" and not (as was the case before, with Windows Live Writer) "Other services", or it'll go wrong after that. 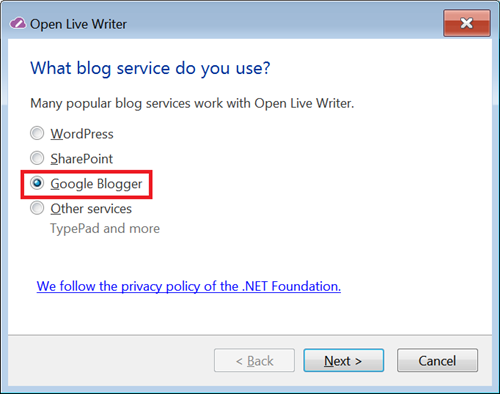 Then most other things should be as they were before with Windows Live Writer - though see known issues. Also, note that Open Live Writer is still a work in progress, so it may take a while to get all features back as they were - e.g. see a summary of some features, and the roadmap.

Also, contrary to what some other people have been saying, you can keep your Windows Live Writer blog posts (at least if they were on an external hard drive), and just point Open Live Writer to the location of your WLW folder!

Posted by Improbulus at 7:07 pm