A new Geographic Web layer has just been released for the fabulous Google Earth (previous post on Google Earth), and it's a goodie.

Here's an example showing the Tower of London, click on the pic as usual to enlarge it - you'll see at the bottom left in the Layers Panel that the new Geographic Web layer is now visible (with a red New! indicator) and already ticked, with Best of Google Earth Community, Panoramio and Wikipedia underneath it, also ticked: 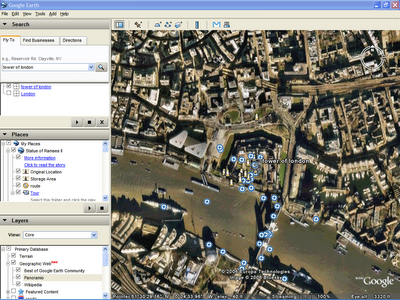 Hover over one of those globe, star or i icons and you'll see a brief summary of what it's about - here's an example: 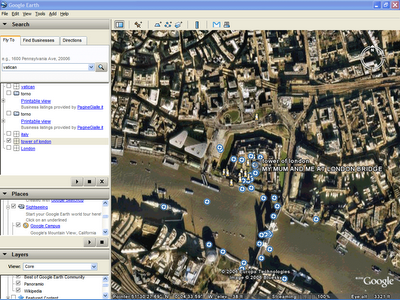 To view its info just click on the icon that you're interested in and you'll get a Wikipedia entry popup, or the photo etc (unfortunately in the Tower of London example I couldn't get the Wikipedia info as it kept trying to give me directions to the Tower instead! But you get the drift).

Here for example is a pic someone took at the Tower, from clicking one of the stars (it's actually Tower Bridge, not London Bridge...): 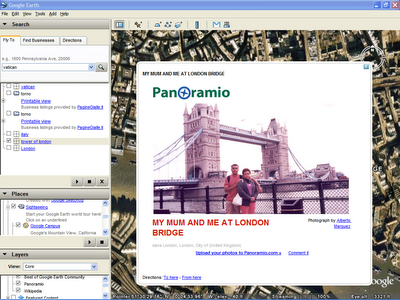 The only downside I can see is the potential clutter factor as time goes by and more people contribute to Panoramio or the Google Earth Community. There should only be one Wikipedia entry about a place, for instance, but as more and more people post to Panoramio, I can imagine that the location you're interested in might get covered over with blue stars so you won't even be able to see the map. For now the solution is to untick (for instance) Panoramio in the Layers panel, to get rid of that sub-layer and thus the blue stars. But longer term, I wonder how that's going to work.

What an excellent layer, and there's such potential in the idea. I can imagine for example integrating Google Earth with a site like TrustedPlaces (brief review in a previous post) to link reviews of restaurants, museums, clubs, pubs etc to the geographic location of those places. Here's to the development of this concept.