UPDATE May 2008: there's a security hole in Foxit Reader version 2.3 build 2825 and possibly previous versions. This vulnerability is supposed to be fixed in the version 2.3 build 2912 to be released "shortly". Don't use Foxit if you have a vulnerable version, until it's upgraded - and obviously get the upgrade ASAP!

Having had it up to here with bloated Adobe Acrobat Reader crashing both Internet Explorer and Firefox and stalling my computer and always trying to update itself, as if it wasn't monstrous enough already, I decided to give up on it altogether. (See other Adobe Reader criticisms on Wikipedia).

So I said "Foxit!" to Adobe, downloaded the free Foxit Reader 2.0 for Windows (there's a Linux version too), and set that as my default reader for the PDF or Portable Document Format files that are ubiquitous on the Net (download Foxit Reader, Foxit Reader user manual). I've been using it for about 4 months now.

Tip: if you want to try Foxit as your PDF reader, uninstall Adobe Reader first, then install Foxit. You can always reinstall Adobe later if you prefer it, it's still free. But if you uninstall Adobe after you've got Foxit in place, Adobe will do its best to screw up your PDF file associations even as you try to consign it to oblivion.

Foxit has massively improved my productivity, efficiency and blood pressure:
It works in Internet Explorer (I have IE 7): 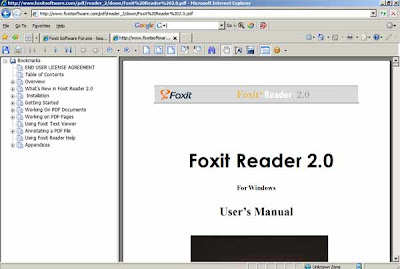 (Tip - in IE the search box seems greyed out if you want to use Alt-f or Enter to find the next term. The trick is to get rid of the box, click in the document and use F3 to move to the next hit.)

It also (sort of) works with Firefox, but see below...

And of course it works as a stand alone application: 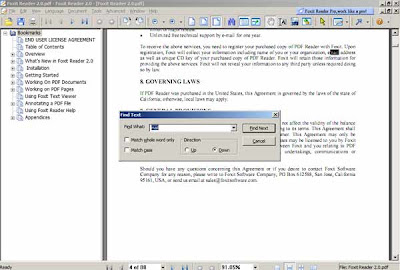 You have to pay for the Pro version if you want more advanced features (they call that Foxit Reader Pro Pack - see what add-ons are free or must be paid for e.g. Foxit PDF Editor and Foxit PDF Creator). But the free version of Reader's got enough features for most of us:
There's even a special Text Viewer mode in the free version you can access via the toolbar: 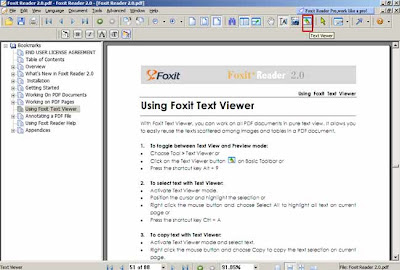 The Text Viewer, as Foxit put it, lets you "work on all PDF documents in pure text view. It allows you to easily reuse the texts scattered among images and tables in a PDF document." This is what it looks like after choosing the text viewer:

And you can convert a PDF to text by a Save As: 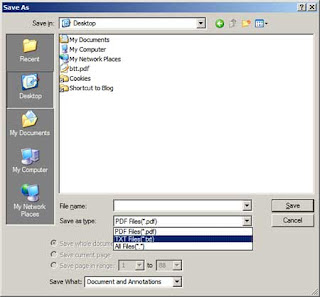 Though I've not tried it myself and am unlikely to have call for it as I won't be doing fancy forms, there's also Javascript support in the free version. Etc etc.

First general PDF tip - if you use Firefox (and if not why on earth not? ) then get the free PDF Download Firefox extension, it makes handling PDFs so much easier (Firefox extension installation howto).

If after you've tried Foxit you want to uninstall Adobe Reader, note that horrid horrid anti-social Adobe Reader won't get its claws out of your computer without a fight. It'll kick & scream and screw up your PDF associations as much as it can, leaving a big mess in your house, scratching your paintwork with screeching fingernails and hanging onto your doorframe while you try to shove it out the door.

In my case, the Adobe uninstall mucked up the opening of PDFs (even though I'd previously set Foxit Reader as the default program for opening PDFs): 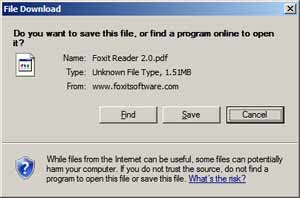 The fix was, in the standalone Foxit Reader app, to choose menu Help, and Set Foxit to Default Reader a couple of times. If that doesn't work, just uninstall and reinstall Foxit, it literally only takes a couple of seconds to do.

Yes, this is a very positive review. There are only two minuses that I've come across, in terms of how I personally use PDF files:

Foxit should open PDFs within a Firefox tab or window, but for me it wouldn't - not till I followed these instructions (similar ones) to download, install and register a plugin. Before you try that yourself, though, read on - it's at your own risk as it may not work and may muck up your other Fox tabs.

Why do I say that? Unfortunately, while that plugin got Foxit to open PDFs within a Firefox tab, the PDF tab took over completely - it wouldn't let me switch to another tab in Firefox - see below, the selected tab should be a blank one, but the Foxit PDF stubbornly stayed on screen:

In fact if I tried to open my history sidebar, it went and shunted what should be the selected active tab to a sidebar, sometimes left, sometimes right, sometimes underneath the PDF tab! See, weird mixed up views: 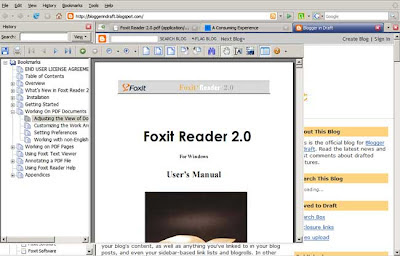 I had to close the PDF tab to view other tabs. And sometimes I was unable even to close that tab without closing Firefox altogether.

Also, some of the usual keyboard shortcuts don't work within that PDF tab - except (after you first click in the document) for the first Ctrl-f search (even F3 won't move to the next hit). And clicking on bookmarks doesn't take you anywhere. At least the toolbar icons work, and keyboard navigation (cursor arrows, Page Up etc). But really, messing up the other tabs in Firefox just defeats the object.

Others have had those problems too with the manually installed plugin (one person's workaround, little different from a separate app in my view!). This is clearly a bug.

So, I've reverted to opening PDFs from Firefox links in Foxit Reader as a separate app. It only takes half a second to open, it's so fast, and I don't mind switching windows between Firefox and Foxit Reader. (To revert, you have to delete the third party Foxit .dll plugin from the Firefox plugins folder altogether - changing PDF Download's "PDF Opening" options away from "Use PDF plugin" didn't work for me).

Foxit users have been clamouring for a working Fox plugin for ages and it's still on Foxit's to-do list (as is the ability to email PDFs). I hope Foxit will fixit properly soon - most people open PDFs from browsers, not email, and no PDF reader worth its salt can get away with lack of full Firefox integration for long.

But despite the Firefox issues, Foxit is still a Gillian times better than Adobe. So I'm sticking with it - at least until Sumatra comes with plugins to open PDFs within IE and Fox, in which case I may well try it instead..

As you can guess, no way am I going back to Adobe, not if I can help it. If only I could use Foxit at work too - Adobe Reader crashes my browser there at least twice a day.

Great review of Foxit Reader 2.0. Please keep on the lookout for the next version coming out VERY soon.

Thanks for the comment Erik, I assume you're the Erik Bryant who's on the Foxit Sales team! Feel free to add excerpts from my review to your testimonials page (a link would be nice...).

And I look forward to the next version, hopefully with the issues I mentioned fixed??

Yes, that's me. I wanted to let you know that we are working hard on the Firefox plug-in. We have put a high value on this because many of our users use Firefox(great alternative software) and also we are both "fox". So please keep your eyes open on the new release. Thanks.

Oh, I forgot. We may also put this on our website and maybe link. Thanks.

Sorry - but I much prefer the excellent PDF-XChange Viewer, excellent range of features, its faster and the rendering is superb.

Really excellent PDF-XChange. After trying with it I forgot about Foxit ))). Better in many-many point and faster not only Adobe, but and faster then Foxit too. And now it offers OCR for free.