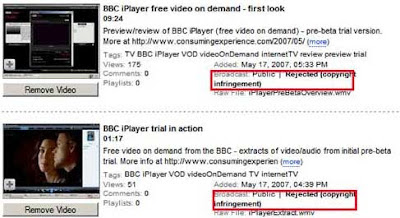 The take down of my iPlayer screencasts from Google's YouTube following complaints by BBC Worldwide really brought home to me how much the balance of power favours those wanting to censor or silence something or someone on the Net, for whatever reason (the Beeb later apologised and agreed that there was in fact no issue with my videos - full story here).

Now Google's YouTube, being American, have a complaints / take down procedure for uploaded videos that's based on the US Digital Millennium Copyright Act or DMCA.

The BBC Worldwide person who so precipitately complained to YouTube did so under the DMCA, according to the emails I got from YouTube (see screenshot above). I do wonder if they even bothered to give the full DMCA details required by YouTube, or whether, because YouTube have an existing relationship with the BBC (and have been in talks about syndicating BBC clips on YouTube in future), YouTube would just take at face value anything coming from an email with a bbc.co.uk address. I bet there won't be a YouTube investigation into what happened (let alone at the BBC). Sometimes, I think, wouldn't it be useful to be the Queen, or at least a small child armed with a telephone...

Anyway, while I'm no copyright expert, from what I can see, and certainly from my own experience, the DMCA is just a licence to censors of all kinds everywhere to go wild shutting up anyone they want to on the Web.

It seems from what the BBC told me (see my other post) that the BBC complainant's concern wasn't about copyright, but the possible leaking of "secret" information about iPlayer (which wasn't actually that secret).

Yet YouTube still took the videos down (possibly because they're being sued, so they're more ready to take things down?). I'd heard before that the DMCA effectively leads people to "take down first, ask questions later" as that's the safest and most sensible course for the person (e.g. ISP or host) who receives the complaint, and that certainly seems to be true from what happened to me. (The BBC Worldwide individual concerned would, I hope, have had to make a statement that they had "a good faith belief that use of the material in the manner complained of is not authorized by the copyright owner, its agent, or the law". Whether they could be done for making that statement falsely is a different matter. The videos still got taken down.)

Misuse of the DMCA isn't new. One of the most notorious DMCA take downs involved a December 2006 interview of Second Life magnate Anshe Chung (real life name Ailin Graef). The interview with her in that virtual world was disrupted by someone who attacked her avatar with, well, flying penises and "doctored pornographic images". The video of the attack was uploaded to YouTube and spread very quickly, which I guess isn't a surprise. Ailin Graef's husband and business partner Guntram Graef put in a DMCA complaint to YouTube, who took down the video. But many expressed the view that the video was "fair use" and made the point I'm making here about the DMCA being a censor's charter. Later he did withdraw the complaint, admitting that it really hadn't been a copyright issue, and YouTube recast the takedown as a terms of service violation matter rather than copyright. (Videos of the attack are now back on YouTube.)

There have been instances since its inception of the DMCA being abused for non-copyright matters, e.g. to shut down animal rights sites. I'm actually on the other side of the fence from animal rights activists myself, and I am totally against the violent action some of them have taken, but I do believe in their right to free speech in terms of expressing their opinions within the limits that civilised society as a whole, rather than certain officious individuals, have seen fit to impose (advocating animal rights, fine; encouraging harassment or worse of scientists who engage in animal testing, wrong side of the line. But that's my own view).

How can you challenge a DMCA take down?

Having to send in a counter notice to get any info at all out of YouTube or whoever seems a bit chicken & egg to me. Some cases of copyright breach are blatant, yes, but the DMCA doesn't seem to distinguish between obvious cases, grey areas and issues which aren't copyright-related at all. And there are some grey areas, even when a complaint is genuinely based on copyright rather than something else, because there can be uncertainty about what is or is not "fair use": a get-out which would allow a video to be posted without infringing copyright. Where there is a grey area, how can you state that you had a good faith belief that the material was removed as a result of "misidentification" or "mistake" (as you have to do in the counter notice), when you haven't been given the chance to discuss it first with whoever it was that complained, in order to find out exactly what their problem was?

In fact, being a pedantic literalist here, what if you knew the complainer was acting with evil intent, and that they hadn't misidentified your video but on the contrary had deliberately targeted your video, so that it wasn't a "mistake" on their part either? You couldn't hand on heart say in the counter-notice that you had a "good faith belief that the material was removed or disabled as a result of mistake or misidentification of the material to be removed or disabled" then, could you? Especially when you had to say that "under penalty of perjury". In other words, it seems to me that you simply can't issue a counter notice based on the fact that the other person has deliberately abused the DMCA by sending in a take down notice that they weren't strictly entitled to submit.

So, it seems the only way to challenge a take down appears to be to send in a counter-notice. Which makes you make that statement above (which I suggest you may not be able to make if you know the original notice was sent out of malice, not mistake or misidentification). And you have to make that statement without knowing the details of the accusations against you. Furthermore it also requires to give your name and other personal details. If you wish to stay anonymous, e.g. you're a whistleblower or you live somewhere where you're liable to be killed if they find out who you are, then you're scuppered aren't you. You just can't send in a counter-notice if you're in that situation. So your video can easily be suppressed, and will stay suppressed. (I blog anonymously for other reasons, but still I don't want to reveal my identity to no good purpose as YouTube would probably just have ignored a counter-notice anyway, who's going to listen to a mere obscure blogger over the BBC?)

I'm not a copyright expert let alone a DMCA expert so I can't really talk, but from what little I know it seems to me that the DMCA is very one-sided, too one-sided. I guess that's not surprising, given its genesis as effectively a tool for big media interests to try to stifle the use of new technologies instead of adapting their business models to suit the digital age (that is the cynical view, but I'm a cynic).

The DMCA just seems to go too far. It was designed to protect copyright, but it seems to have turned into a censor's dream come true. As far as the ISP, video file host or message board etc is concerned, it appears that the sensible action from a business viewpoint is just to take down whatever was complained against, and leave it to the poor sod who's been targeted to try to challenge it. (I believe that the situation is much the same in the UK under the Electronic Commerce Regulations.) So it seems everything's weighted too much in favour of those who just want to kill something they don't like on the Net, at least if - I'm just guessing here - the servers it's hosted on are located in the USA or the Web service is run or owned by a US company.

You'll notice that YouTube even allow people to make a DMCA complaint by email, enabling a would-be censor to issue a takedown in a matter of minutes.

So a complainer can be judge and jury, and whoever receives the complaint will unquestioningly serve as their obedient executioner, without the person who uploaded the video (or put up the allegedly copyright-infringing content) on the Web ever having a chance to hear the case against them, never mind try to refute it. To me that's a breach of a basic human right, the right to a fair trial, as well as the right to free expression, and I hope that no one would wear that here in Europe given our Convention on Human Rights. Well I gather some Americans think the DMCA is unconstitutional because of its misuse to strangle free speech there, but they seem to have been ignored.

This sort of thing really has a chilling effect on freedom of speech, hence the excellent site Chillingeffects.org, a joint project of the Electronic Frontier Foundation and various US law schools, which aims to to encourage respect for intellectual property law while frowning on its misuse to "chill" legitimate activity. They maintain a database of Cease and Desist letters that people have received and input, in order to document the chill (poodle photo complaints and all).

At least there are signs that people are fighting DMCA take downs, e.g. Stephanie Lenz, with the EFF's support, suing YouTube for removing a 29-second video of her toddler dancing to Prince! (more on that here, there have been other misuses too, and see generally the EFF page on the abuse of DMCA to shut off free speech).

It's not very good, then, is it

So. If I don't like how I'm portrayed in a video, if I think it's negative about me, if I'm not even mentioned in the video but I don't like the message it conveys, if I'm ultra strait-laced and think a video is too suggestive, if I have rigidly narrow beliefs and feel a video is somehow contrary to them, if I am a government wanting to gag a person who is critical of my policies, if I am a company wanting to bury a corruption report, hey if a video is just being positive about my bitter business rival, it seems I am free to misuse the DMCA. Same with anything else on the Web, not just a YouTube video. Just file a DMCA complaint and the website or web service concerned will have to take it down, no questions asked.

You can challenge a DMCA take down, but only if you reveal your personal details. Given that the ability to be anonymous is a major, indeed essential, protection for whistleblowers and people in repressive regimes who want to speak out for basic freedoms, this makes it impossible for anyone who for very valid reasons wants to keep their identity private to ever be able to reverse a take-down. Censorship 1, freedom of expression 0.

Please let them never have anything like the DMCA in Europe. I'd like to think, or at least hope, that over here we still value our civil liberties more than powerful media dollars.