My Blogger Dashboard etc suddenly started showing some text in German (see screenshots), but as usual Kirk came up with the fix so I didn't have to do any troubleshooting of my own, thanks Kirk!

To stop the occasional German messages, the solution is simple - if your Dashboard language is "English - UK", just change it to "English - English": 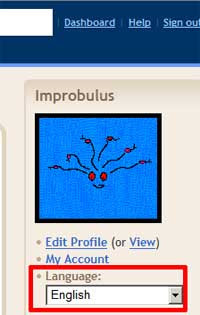 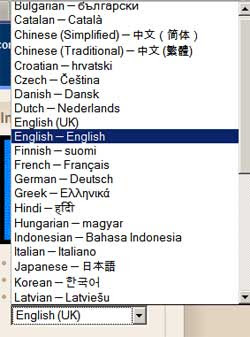 (Sadly the change didn't fix the problem of the comment moderation and published comment email subject lines no longer showing the title of the post, so that must be a different issue or bug.)

"English - English" here of course means US English, as the gospel according to Google clearly dictates that American English is the one true "English". So what if Wikipedia thinks "English - English" means British English? Google clearly not only want to organise the world's information, they want it to be in US English, so there! Maybe the differences between the two were too confusing, or we British bloggers on Blogger have been unintentionally saying things which are really awfully rude in American even if they ain't so in UK English.

Just to hammer home the point and hasten the conversion to the only English that counts, various Google services won't work, or didn't use to work, unless your language preference is set to US English, e.g.:

I'm sure there are other examples I've not encountered yet - and if anyone has come across others, please do post a comment here, I'd be very interested to hear about it!

The weird thing is that Blogger used to work perfectly well in "English - UK", but now obviously Google think we British are little different from the Germans... and hey, many people would say we have more in common with the Europeans than the Americans now, anyway. Or is it a cunning ploy to get us all to speak German - do Google have a secret agenda here..? (have you seen that excellent EuroEnglish joke that's been around just about forever?)

So us British English speakers had better like it or lump it, or presumably better yet just switch to using American English or else, nyah nyah yah boo sucks!

American imperialism (or rather linguistic imperialism) at its best, innit?

Thanks for the fix.

Why does 'English' therefore mean 'German'?

Point, Hermes! Must be Googlespeak, of course - we'll probably need a "World according to Google" dictionary or translator soon. Or else... did you see that EuroEnglish joke? A subtle comment on that, perhaps?

But setting the language option in Dashboard isn't really helpful, because Google Blogger couldn't remember the setting! It still automatically assigns the language according to your IP. Probably it would be fixed if I set the cookie setting for Google Blogger as always "Allow".

Bottle, thanks, you're right, your cookies should be set to allow Blogger for the English-English preference to be saved.

I am having the same problem, but I have my language set to English, and it still does not help. Even when I have cookies set to "allow" it doesn't help the "Dashboard" part of Blogspot. Any other fixes?