Google have provided a "Priority Inbox" feature for Gmail since they launched it in the late summer of 2010, clearly with their sights set on wooing over enterprise and SMB users (and educational institutions) to Google Apps, trumpeting the potential time savings and productivity gains - to some external coverage, and even available to a limited extent on Android phones.

It was highlighted as a new feature when you logged in to Gmail for a while, but not any more. From my experiences of using it, it's generally helpful - even though normally I'm a control freak who doesn't like anyone else, least of all software, automatically making decisions for me.

If you're a new Gmail user, or you didn't activate it when it was featured, this post gives an overview of this feature.

What does Priority Inbox do?

If you activate "Priority Inbox", you get a new Priority Inbox view which splits your incoming Gmail email into 3 sections: 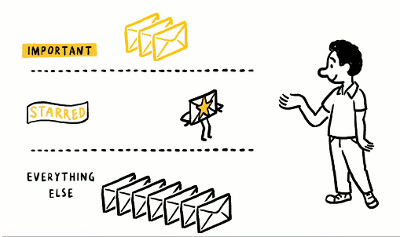 The idea is that Gmail sorts and prioritises your email - the important stuff goes at the top so that you see it first. (See the Google video promo at the top of this blog post.)

At first, it guesses what to "file" under "Important" and what to put in "Everything else".

You "train" it by clicking icons to indicate an email is Important ("Mark as Important" has a + sign) or "Mark as not important" (- sign), so that over time it should learn and improve. There are icons both at the top of the Inbox (outlined in purple below) and also (outlined in red below) of the individual email, so you can "promote" or "demote" a single email or a selected batch in one go.

How to activate Priority Inbox

Go to Settings (top right) and the Priority Inbox tab (or while you're logged into Gmail click this link).

Then select "Show Priority Inbox" at the bottom and click the "Save Changes" button.

The Gmail help pages have some further help and tips. Google have also blogged some specific tips.

Especially in the early days, be sure to check the "Everything else" section in case important emails get shunted there by Google. If an important email gets put in that section, use the "Mark as Important" icon to tell Google (and hopefully it'll do better next time with similar email).

Note that if you star an email it appears in the Starred section, but if you then archive it, it won't be shown there. Useful for keeping just the "star starred" items there and preventing less important starred items from cluttering up that section.

It's worth checking out your Gmail Settings for Priority Inbox (click that link only after you've logged into Gmail).

Do you find Gmail sometimes goes to the Priority Inbox, other times to the "normal" Inbox? Probably that's happening because "Default inbox" is set to "The last inbox I used". Really confusing and bad for usability. If people choose to turn on Priority Inbox, then this setting should default to "Priority Inbox". Change it to that, and click "Save changes" at the bottom.

For keyboard shortcuts fans - the g then i combo takes you to whatever Inbox has been set in the Default inbox section. So if you change it to "Priority Inbox" the combo will always go to that page, rather than sometimes one and sometimes the other.

Another tip - the Priority Inbox sections' Options let you choose how many emails you want to see in each section, and other options. For "Starred" I personally use "Show up to 10 items" so that the "Everything else" emails don't disappear too far off my radar.

Still too many starred emails in the Starred section? (even though only the latest 10 are displayed). Just archive the ones you don't need or want to see in that section.

So I wish Google would add an option in the Settings which you can select, something like:

When I read an email in the Important and Unread section:

But those are relatively minor, all in all I find Priority Inbox pretty useful to help me manage my email. I've even been able to use it to produce an "All unread email" view, which doesn't exist with Gmail. I'll blog about how to do that in a separate post.