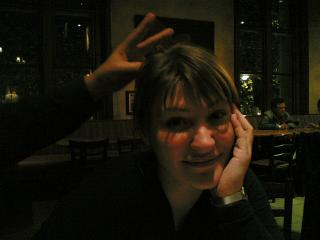 Adriana Cronin-Lukas. Fingers courtesy of Andrew... ::)
The second London Girl Geek Dinner (aka London Geek Girl Dinner aka London Girly Geek Dinner!) took place on Tuesday, organised as before by the ever efficient Sarah Blow (thanks Sarah!). It followed the same pattern of drinks and mingling, then a sit down dinner with speeches at the end.

After an intro by Sarah there were speeches, mainly on blogging, by Eileen Brown, Microsoft evangelist and the first woman ever in the merchant navy, and blog specialist Adriana Cronin-Lukas. Sadly the speakers, though miked up, had to compete with the boisterous Yalies with whom we shared our upstairs room, though they were rightly roped off into another area (I say that only tongue in cheek! But you can tell I didn't go to Yale...). So, sat at the back in perhaps a subconscious attempt to compensate for my dutiful front row position at college, I could barely make out some parts of their speeches. Perhaps, a la Spinal Tap, the Texas Embassy could be persuaded to invest in an amp that can be cranked up to 11?

Eileen is also going to do a podcast of the evening - the link should be available via the Girl Geek Dinner wiki when it's up.

It seemed to me there was more mingling this time and people kept less to their tight little groups. I managed to chat with a few people, though again not as many as I would have liked (and if I've forgotten anyone or got your details wrong, my apologies, feel free to correct me and hit me for a drink next time to make up for it!): 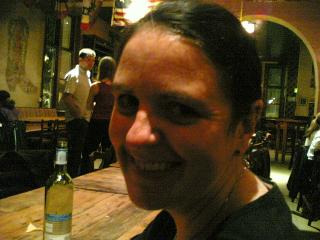 Helen Keegan
It's a pity that there were fewer people than last time and that a smaller proportion of them were women (about two thirds to three quarters, compared with all but 3 or being women last time). I hope more women will turn up for the next dinner in January. In case anyone needs extra persuasion the food was tasty and there was heaps of it (I stuffed myself and still had to leave some on the plate, shocking I know), with free wine by Stormhoek as before, but no dessert so you can feel virtuous not having a sweet - sadly we didn't get the excellent starters they served last time, but again the Texas Embassy staff were really friendly and helpful.

It would be great if we could have the equivalent of a Blogher conference (aimed primarily at female bloggers) here in London, perhaps growing out of these dinners - I bet Sarah would be great at organising something like that! Out of the Blogher 2005 conference they've developed a Blogher vision, mission and position statement. The Blogher 2005 survey post by Lisa Stone makes interesting reading, summarising what those who attended that con thought about it and what they'd like out of a future conferences. You can also listen to audiocasts of the Blogher 2005 sessions (just change the "1" at the end of the URL to 2, 3, 4 etc for the others - the page with the full list doesn't seem to be up at the moment) and even subscribe to a feed for the Blogher 2005 audiocast series. But of course blogging took off in the USA well before it did here, and even so Blogher 2005 was I believe the first conference for female bloggers ever, so it may be a while before it's feasible to hold one in London.
Technorati Tags: London Geek Girl Dinner, London Girl Geek Dinner, London Girly Geek Dinner, London Geek Dinners, Geek Dinners, Geek Dinner, girl geeks, London, Blogher, conference, Blogher conference, bloggers conference, blog, blogs, blogging, bloggers, Improbulus, A Consuming Experience, Consuming Experience
Posted by Improbulus at 10:21 am

Well it was great to meet you too! [Correction corner: it's Deirdre, and i should spend less time organising events & more time adhering to my job title of Editor. Oh how i've strayed!] It was a shame you couldn't hear Adriana at the back. Hopefully see you next time & with a louder PA :)

Sorry Deirdre, duly corrected - I could have sworn you said events organiser...