This post reviews the new Google Pack, newly released on Friday, with some tips and thoughts. 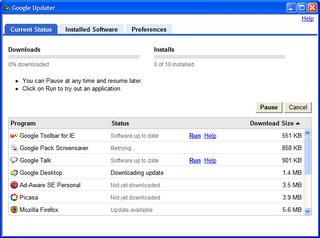 At the moment this is what you can get in the pack:


According to Google the pack is a "free collection of essential software from Google and other companies... You can download and install the entire Google Pack in just a few clicks. And the included Google Updater helps you discover new programs and keep your current software up to date." Their criteria for inclusion of software: "free, easy to use and useful... software that will be considered essential to users of all levels and that respects a user's right to control his or her own computer... we won't offer software that is considered to be "adware" or "spyware.""

Note that it's not all totally "free" - Norton Antivirus is free only for 6 months, then you have to pay for anti-virus updates.

You'll see from the list that almost all the software is already available for free from Google or elsewhere. Google Updater, which does all the clever organising of the downloading and installation (and checking for and installing updates thereafter), is new. So is Google Pack Screensaver (which lets you use your own photos/pics as your screensaver), and I didn't have any of the free GalleryPlayer HD Images before.

They do seem to have offered most of what we'd think of as "essential" software, and it's great that they've included Firefox, but notably absent (to me) is a firewall, and also any in-house Google music/video player software - hence the inclusion of RealPlayer I guess (I wonder if a player's on Google's to-do list?)

[Added later:] Aha! After releasing Google Pack, indeed on the same day, Google announced their planned Google Video Store, "the first open video marketplace enabling consumers to buy and rent a wide range of video content from a major television network, a professional sports league, cable programmers, independent producers and film makers... people who visit the Google Video homepage... will be able to browse listings of video by category from the store or search Google's entire collection of videos... content from Google Video can be viewed with a new player that can be downloaded for free from any playback page... Google Video Store will be available throughout the world, however purchasing premium content in the Google Video Store will only be available in the U.S." (my emphasis). So why didn't they include the new Google Video player as part of the Google Pack? Surely that would have been logical? Who knows the mind of Google...

Anyway, what's interesting and different is that Google are offering the ability to download and install everything in the pack efficiently, all in one go, via Internet Explorer or Firefox. As they say, sometimes it can be a nightmare to install software, especially lots of it in a row, and they have automated the process neatly for this bundle. A very clever way for Google to get their software onto lots of PCs! (no support for Mac or Linux yet though, and you have to have administrative privileges for the PC on which you want to install the pack).

As I have most of that software already, I tried it because it was (I thought) an easy way to update what I had, plus grab the rest, in one fell swoop. (Though note not all the latest versions of the software will be installed, only versions which have "passed" Google's criteria and testing.)

It's good that Google have borne in mind the needs of dial-up users, with the downloading and installation happening in the background while you use your PC as normal, plus the ability to pause the lot and then resume later (pausing may be useful of course for broadband users too).

It's also good from a privacy viewpoint that "Help us improve the Google Pack by allowing us to collect anonymous usage statistics" has an opt IN box against it, so a user has to positively choose to allow Google to collect data from them.

For subsequently checking and managing your Google Pack software (e.g. uninstalling), you can call up Google Updater, or if you go to the Google Pack site it remembers your system setup and only displays what you haven't yet installed. Google Updater normally lives in the system tray but you can get it to show only when there is new software to notify you about, via its preferences: 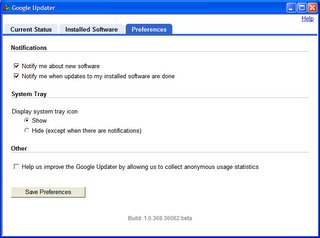 If you want the pack, don't click "Download Google Pack" yet - click "Add or remove software" first. This is because for some odd reason Google haven't made the entire list of software in the pack downloadable by default. I'm not sure why, personally I'd have listed the whole lot on the main page and made it a "Remove software" link instead.

If you click add/remove, then you'll get the chance to tick the missing ones before you download: Google Talk, RealPlayer, GalleryPlayer HD Images, Trillian. (Sure you can do that afterwards, but why not do it all at once?). It's rather odd that Google Talk isn't ticked, and that they offer both Google Talk and Trillian which do pretty much the same thing.

It's not in their installation help yet, but if you have a firewall (and if you don't have one you really should!), you will need to let Google Updater through it. It seems to install that first and then it gets on with sorting out the rest. (An oddity is that on my PC at least Updater wants to connect to blogsearch.google.com rather than say pack.google.com. I wonder why?) You'll also have to let Internet Explorer, as launched up Updater, connect to (again) blogsearch.google.com.

(I'd also mention that I couldn't get anything to happen with Sygate Personal Firewall (which has been discontinued anyway, sob), as it wouldn't let Updater "hijack" Internet Explorer (through which it does the downloads), and I couldn't figure out how to give it one-off permission (the "Retrying" in the pic above was before I sorted this), so I uninstalled Sygate and installed a trial version of ZoneAlarm Pro instead. I don't know if it's that or Google Pack which did me in, but my desktop and Quick Launch icons have now rearranged themselves alphabetically and I couldn't move the Quick Launch items even though drag was enabled. The fix may be the subject of a future post!)

Also, I had to let the Picasa installer/setup program payEF.tmp.exe through my firewall too, separately. Pity they haven't integrated it fully enough yet that all you have to do is give Updater permission and it sorts out everything else - let's hope that in future the pack will install more slickly.

But having done all that, it identified my existing software was up to date in a trice, then proceeded to download and install the rest quietly in the background.

I had to grin wrily at Google's statement that the software in the pack respects user control... as Google Pack Screensaver took over my PC and made itself the default screensaver, activated, without asking me.

I also don't like programs starting up automatically unless I've chosen to let them, so I've disabled that for Picasa Media Detector.

As I said above, this is a very clever way for Google to get their software onto zillions of desktops. And with their Google Updater, it's easy for them not only to update the existing software but also to add new software to the pack, and they're clearly already touting for offers. Who knows what deals they could do with other companies eager to take advantage of Google Updater to get basic versions of their software onto consumers' PCs - reminiscent to me of Microsoft's arrangements with AOL etc to put their icons onto Windows desktops.

If Google can get lots of people to adopt the model of one-click (or at least a few clicks) installation of software in the background over the Net, we may be that much closer to the Web replacing the desktop, or at least being the prime interface to the desktop. I wonder how worried Microsoft are?

but notably absent (to me) is a firewall, and also any in-house Google music/video player software

Yeah, and windows xp comes with a browser too, you gonna stick with it?

I'd go with Kirk here. Windows does come with a firewall, indeed, but it isn't anywhere near as good as even free stand-alone products like ZoneAlarm's basic version, or Kerio's.

I just became aware of the "Google Updater" feature yesterday. While it may offer some useful programs for a typical user, it appears to have broken an important basic rule in the way it has been implemented. That is, the "Updater" appears to have been pushed on users without so much as a hint of asking the user if they wanted to see these notices about the available programs. Again, the programs appear to be useful but it is improper for Google, or anyone else, to just install software that then pops up and encourages installation of programs. The novice user, of which there are millions, is not equipped to make decisions about such software. This is an example of bloatware that has and probably will continue to give the industry a black eye. A personal computer should be constructed and maintained with minimum complexity to ensure maximum efficiency. Our industry must realize we do NOT do this. We create computers with a dizzying array of capabilities and then sell them to unsuspecting users who need a small fraction of these features.

We must stop this overselling and realize the vast majority of personal computer users do not need or want all the bells and whistles that the current crop of machines include. Make the extras available but don't foist them on bewildered users who just want to write a note with a word processor, look up some information on the Internet with a browser and send and receive emails. This will, of course, make the more exotic software more expensive as far fewer customer will buy it (only those who really need it) but in the long run, the personal computer industry should be better off with a much larger percentage of happy customers who own machines that work much better because they are not full of complex applications that fail due to those complexities.

Google, if you are going to offer these programs, at the very least, make it super obvious how to kill this "Updater" rather than make the person search your help files to find out how to do that. Many of the programs look to be useful but please make it more obvious how to ignore the whole thing for those users who should not even consider these programs. Simplify and clarify. Don't confuse and scare. Remember, "Do no evil" is your motto.

Anon you make good points and I was in fact planning a post on pretty similar things myself, which I haven't got round to putting up yet. I probably will soon, now, so please keep your eyes peeled, I'd be interested in what you think about it.