Feedburner Feedflare: add interactivity to your feed - the future of feeds

Feedburner have just enhanced their free service still further by, as they put it, introducing "an interactive RSS service to engage subscribers... The company will also release a full set of open APIs (Application Programming Interfaces) to allow third-party developers to build and integrate custom FeedFlare services.".

What that means is this: if you activate the new Feedflare option (once logged in to Feedburner, Feedflare is under the Optimize tab for the feed), you can choose to add extra links to the end of each post in your Feedburner feed: 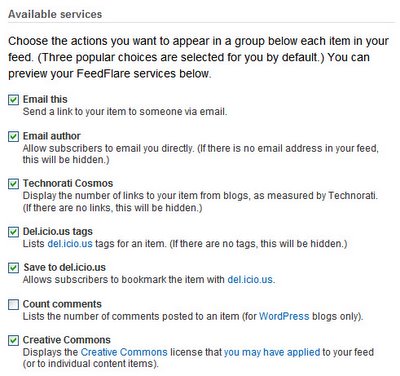 (you'll see I've ticked all the options except one which isn't relevant to this blog as it works only for Wordpress users; as it hides absent items I feel that picking all the options won't clutter up my feed too much. And I'm really pleased that Feedburner have added the ability to view the CC licence, though in a different way from what I'd suggested (clickable CC logo) in my post on full/partial feeds.)

Now my feed looks like this (in browser-friendly view and also in Feed Demon), with a new line of links at the end of each post:

They're pretty self-explanatory; the "Recent tags" link lists what tags people have tagged your post with recently on Delicious, and when clicked it will take you to the page on Del.icio.us showing who's bookmarked that post.

But remember that you have to enable Feedflare separately for each of your feeds, if you've burned more than one (e.g. to offer your readers both full and partial feeds).

[Edited later:] Feedburner have now provided more info about the new enhancements on their blog - it all sounds excellent: "This is just phase one of FeedFlare... Very soon, we'll provide publishers with the ability to tie FeedFlare into the originating web site content. This will give publishers the ability to ensure that a consistent set of actions and meta-data are displayed alongside the content wherever it is consumed. There have been numerous how-to's for integrating tags and other services into web content, but FeedFlare will simplify this process and provide publishers with an architecture for genernalized content item processing - a CMS-independent plug-in framework for web services, if you will (and you should)... Shortly after we launch FeedFlare for Web sites, we will launch our favorite part of this service: an open API for adding new FeedFlare services... we will publish a complete specification and API with examples. Anybody can write to the spec, and publishers will be able to start using these new services immediately. There is no application process or submission form at FeedBurner - services that implement the specification will just work..."

[Edited later:] Thanks to John of Feedburner for his comment - I was just too quick off the mark and impatient, it does indeed work, and showed on Bloglines etc a few hours later.

One problem is that clearly there are still some problems with the new service, and it seems to me that more testing and tinkering is needed. While the new links display fine in some readers, it won't in others - notably, in Bloglines, where the post just looks like this, i.e. sans the whizzy new links that should appear:

It's the same with Google Reader, I won't include yet another screenshot, you get the picture.

Also, if you offer Feedblitz email subscriptions to your blog, note that the new links are really graphics, not text, so subscribers who have set their email not to display images won't see the link descriptions.

So, clearly there is still work to be done in getting the links to display in all feed readers (and perhaps Feedburner could consider using link text instead of graphics, to overcome a possible email pic display problem for some users - especially as the pics are of text anyway.) [Edited later:] John has now also explained why they use graphics, clearly they've thought all this through very well, see his comment below.

I also think that, while the link to bookmark a post on Delicious is useful, given that feeds are continually updated and changing (showing only the X most recent posts on a blog), it may be that in some cases the post in question will have dropped off the feed by the time it gets bookmarked on Delicious or linked to by a blog indexed on Technorati. However the link can be helpful when people are quick off the mark tagging or linking to a post, as you can see in the example pic above.

The future of feeds

These changes I think illustrate a trend: that feeds are increasingly converging with webpages in many ways, with similar features being added to feeds (e.g. "email this post", which was built into the standard Blogger template, and the ability to bookmark a post on Delicious, which I added to my blog a while back - see my howto). The future plans of Feedburner sound like just the start.

Another area of convergence is advertising. One supposed objection to offering full feeds is that people want to draw readers to their main websites where their ads are located, see e.g. this Guardian article last week). But, as that article also observes, ads are being introduced into feeds, e.g. Google's Adsense for feeds which is currently in beta. While there are views that advertising on feeds won't be as effective as advertising on webpages, I'm not quite sure why not, myself. Personally, as a consumer I'd be equally likely to click on an ad in a feed as in a blog or webpage, depending on its relevance to me and how it's been presented; and I'm confident that the way ads are presented in feeds will rapidly improve. As regular readers of my blog know, I believe in consumer choice - if people want full feeds, then give them the option.

People are doing more and more clever things with feeds, taking advantage of their flexibility - and I do believe that we're only scratching the surface so far in terms of the possibilities.

Hey, glad you like the service! You're pretty quick on the uptake, by the way... impressive!

The reason you're not seeing FeedFlare in Bloglines is because Bloglines (as with Google Reader and other web-based feed readers) has not updated your feed yet. Most of the web-based readers update your feed on a 1-4 hour schedule, so it may take a while for any changes to come through.

As you pointed out, FeedFlare is a series of images. We do this so we can change the text (e.g. add new delicious tags as they show up) without forcing some feed items to show up as "unread" in your feed reader.

So, any feed reader that displays images (most do) is compatible with FeedFlare.

Please let me know if you have other questions! (You can email me at johnz AT feedburner DOT com.) Thanks again for giving FeedFlare an early test drive.

Thanks for the comment John! Clearly I was too quick off the mark, in this case... It did indeed start working fine in Bloglines etc some hours later and I've edited my post accordingly.

As you say, most feed readers are fine, it's only email display that may be an issue, and only for those people who've turned off images (who I imagine could just turn them back on).

I may well take you up on that invite...