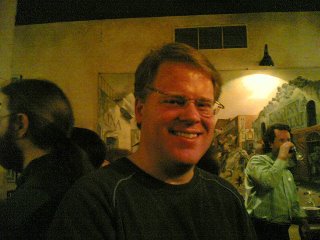 It was interesting to meet Robert Scoble at the Geek Dinner on Saturday, albeit only briefly - a very nice, personable bloke. Here's the MP3 of his speech (not fab quality, but I was 10 feet away from the PA and didn't use a dedicated MP3 recorder):
Robert Scoble London Geek Dinner 10 December 2005 MP3 (2.4 MB, 2.28 mins).

Geekery: the speech was recorded on my Nokia 7710, converted from AMR to WAV using Miksoft's free mobile AMR converter, then edited down, for length/filesize reasons, to just his speech and exported to MP3 using Audacity). Pic above also taken with the Nokia 7710 which thankfully saves pics in JPG.

This time it seemed to me there were more bloggers, whereas previous geek dinners I've attended have been dominated by "hardcore" techies. I didn't recognise most of the people there but saw the usual suspects like Ian Forrester, and the regular Geek Girls - Sarah Blow, Deirdre, Helen and Rachel (all of whom I'd met at previous London Geek Girl Dinners: August and October 2005). (Oh and the table dancing Emma, who's moving on to asset management at London Underground - "physical assets", she says, I say no more. Though apparently she won't be shuffling Tube trains around, no doubt next time she'll enlighten me further.)

The bartenders were lovely as usual, and the starters better than the main course (though the main course was pretty good and I rather overfilled my plate and couldn't move much thereafter!). I met quite a few people I'd not met before, though there were plenty more I just never got a chance to speak to. The people I chatted to the most were:

And though we didn't talk for very long, I promised to stalk him so I'll start here - Peter Nixey, who's working on a desktop RSS reader.

Given the guest speaker, it's not surprising that people from Microsoft were there in force (as at the last London Geek Girl dinner). But what is interesting is that Microsoft co-sponsored the event, paying for half the price of the food (Stormhoek provided free wine). I was a little surprised that I was charged a tenner instead of the expected twenty, but that was why, as they announced after Robert's speech.

Microsoft, acknowledging they have some catching up to do, seem to be making a concerted play for the hearts and minds of London geeks and bloggers (not just London, either; there were people there from as far afield as e.g. Oxford and Leicester (hi to Jared!)). Stomachs seems a good way to start - and they'll be inviting the people who signed up on the geek dinner wiki to participate in betas, I'm not quite sure of exactly what yet, but it will be interesting to find out. As they said, where were Google and Yahoo? I wonder if they'll turn up at future geek dinners.

Thanks Improbulus :) - look forward to talking for longer sometime soon

I have written a post about it also, I was quite puzzled about the microsoft sponsorship and the speech and the 10 £ they paid of my bill.. hmmm

Hi there, look forward to seeing you at the next Geek Dinner! When who knows whether Google will pay part of the bill..??